In December 2013, trans* and intersex activists and funders currently supporting or interested in supporting trans* and intersex rights, came together in Berlin for a first-ever funding dialogue. The lessons learnt and outcomes from Advancing Trans* Movements Worldwide: A Meeting for Funders and Activists Working on Gender Diversity are documented in the report.

How can I use the report? The report captures discussions, outcomes, and recommendations from the meeting that support better coordination and collaboration on trans* and intersex funding.  The report also highlights the collaborative methodology undertaken by the meeting organizers to ensure the broadest possible participation and representation of trans* and intersex activists in the convening.  For funders, the report provides important recommendations on what to fund and how to fund on trans” and intersex issues, as well as an overview of the state of the trans* and intersex movements and critical challenges facing both communities. For activists, the report outlines concrete steps for engaging donors and other activists in conversations about access to much-needed resources. In general , we hope that this report will support the growth of funding for trans* and intersex movements worldwide by laying a strong foundation of equitable and fruitful collaborations between activists and donors, and we invite you to distribute the report widely among your networks.

What has happened since the meeting?  Since the Berlin meeting donors and activists have been working to move forward the conversation on funding for trans* and intersex rights in a number of ways. First, the outcomes of the meeting and data from the report “The State of Trans* and Intersex Organizing” by Global Action for Trans* Equality and American Jewish World Service have been presented at a number of regional and international conferences, including the International Human Rights Funders Group’s 2014 San Francisco and New York Conferences;  the 5th European Transgender Council, the 2nd Trans Health and Advocacy Conference in Southern Africa and the 2014  International AIDS Conference. Second, the Global Philanthropy Project, a collaboration of funders and philanthropic advisors to expand global philanthropic support to advance LGBTI human rights in the Global South and East, established a Trans Working Group with the goals of a) increasing the level of funding for trans* issues worldwide and b) increasing the effectiveness of funding on trans* issues. The Trans Working Group has begun conversations about how current trans* funders can coordinate existing funding efforts and more broadly, implement the recommendations that came out of Advancing Trans* Movements Worldwide. The group will also explore how GPP members can more effectively fund on intersex issues.

How can I be involved in the conversation? If you are a funder interested in learning more about funding on trans* or intersex issues and becoming involved in the Global Philanthropy Project, feel free to contact Sarah Gunther, Associate Director of Programs at Astraea Lesbian Foundation for Justice at sgunther@astraeafoundation.org. For activists interested in working on advocacy to increase resources for the trans* and intersex movements worldwide, contact  Mauro Cabral Grinspan, Executive Director of GATE at gate@gate.ngo. (Updated 25/01/2021)

Spanish and Russian versions of the report will be available shortly. 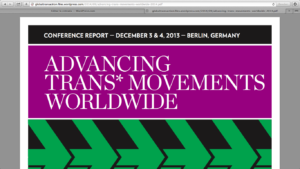