The involvement of civil society, in all its diversity, in the national consultation to develop the Global AIDS Monitoring (GAM) report is critical because civil society can provide valuable data, especially for key populations and harder to reach groups. Civil society will also ensure that all relevant partners are engaged and play essential roles in implementation and reporting.

The review and reporting process for the 2020 period started on 15 February 2021. Countries need to send their progress reports to UNAIDS by 31 March 2021.

Read the 5-step guide below​

URGENT: The 2021 review and reporting process at the country level is underway. Join now! Be involved! Be heard! 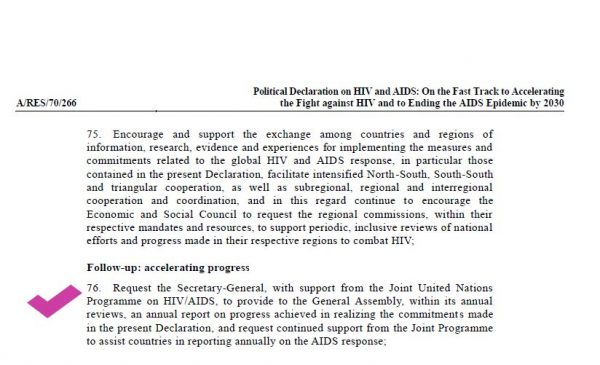 Greater civil society engagement has been called for in every aspect of the AIDS response, including the Global AIDS Monitoring (GAM) process. In the Political Declaration on HIV and AIDS: On the Fast-Track to Accelerate the Fight against HIV and to End the AIDS Epidemic by 2030 (Political Declaration), countries agreed to “…provide to the General Assembly […] an annual report on progress achieved in realizing the commitments made in the present Declaration…”. In 2021 countries are expected to assess their achievements against the targets set in 2016. The reported data are utilized for national-level reviews (including the Global Fund applications and similar reprogramming efforts), regional assessments, and global analysis. Data will be included in UNAIDS, WHO and UNICEF reports in 2021.

The involvement of civil society, in all its diversity, in the national consultation to develop the country report is critical because civil society can provide valuable data, especially for key populations and harder to reach groups. Civil society will also ensure that all relevant partners are engaged and play essential roles in implementation and reporting. The UNAIDS Guidance document for the 2021 GAM encourages governments to include the inputs of the “full spectrum of civil society and community—including NGOs, networks of people living with HIV and key populations, faith-based organizations, women, young people, trade unions and community-based organizations” in the GAM report.

The COVID-19 pandemic has drastically altered engagement, preventing most in-person discussions and data collection while also presenting opportunities to expand engagement using new technologies. The effect of COVID-19 on civil society engagement in GAM has not been addressed.

The review and reporting process for the 2020 period started on 15 February 2021. Countries need to send their progress reports to UNAIDS by 31 March 2021.

The community sector holds the key to critical data and information that governments may not have or are unwilling to report on, particularly concerning the needs and challenges faced by key populations and those most at risk and marginalized. Community groups can bring to the table relevant and updated information that will present a more realistic picture of the country’s epidemic.

Five Steps for Meaningful Inclusion in the GAM Process

These steps will ensure meaningful involvement in the 2021 Global AIDS Monitoring process by mobilizing the community sector to advocate for ‘More than a seat at the table.’

Some countries demonstrated terrific levels of engagement in the GAM process, with coordinated input into the process (like in Kenya4) and organized efforts to draft shadow reports (like in Malawi5 and Nigeria6) and to respond to the ICASO’s survey to assess how civil society was involved in the GAM in 2019 and 2020. In April 2021, ICASO will launch a new edition of the survey. This survey will increase accountability and transparency and will provide support for advocacy actions in the future.

1 Consider the community rejection of the use of unique biometric identifiers, because people feared the data would be used to persecute specific stigmatized groups reported here: Kelin Kenya. 2018. “Everyone Said No”: Biometrics, HIV and Human Rights A Kenya Case Study. https://www.kelinkenya.org/wp-content/uploads/2018/07/“Everyone-said-no”.pdf

2 Progress in responding to the HIV epidemic is measured against a set of 10 global commitments and expanded targets established in the 2016 Political Declaration on HIV/AIDS. These commitments are:

3 The National Commitments and Policy Instrument aims to measure a country’s progress in developing and implementing policies, strategies and laws related to HIV. It has two sections: Part A – to be completed by national authorities; and Part B – to be completed by civil society and other nongovernmental partners. The Instrument is structured around the 10 Fast-Track commitments in the 2016 Political Declaration on HIV and AIDS. Countries are required to complete a full NCPI every two years. Guidance if provided from page 123 of the guidelines for 2021 Global AIDS Monitoring provided by UNAIDS: https://www.unaids.org/sites/default/files/media_asset/global-aids-monitoring_en.pdf

Over the past ten years, #trans & gender diversity issues have been addressed increasingly at the @UN & we need to continue to build on this work.

So what can you do RIGHT NOW to engage with the UN on trans & gender diverse issues?

Thank you so much to @ItGetsBetter and @riotgames for including GATE in your fundraising! Your generosity, and the generosity of your viewers, is incredible 🥰

Unfortunately, yesterday's #TransDayofVisibility stream was not a success...

APRIL FOOLS: It was amazing, and we raised more than $9,000 for @theokraproject and @gateorg with a $5K donation from @riotgames' Rainbow Rioters!

Even better, you can still watch & donate on Twitch:

The Center for Applied @TransStudies is the leading academic organization dedicated to scholarship on the social, cultural & political conditions of #trans life. They are an independent nonprofit run by trans people for trans people. https://www.appliedtransstudies.org/ #TransDayOfVisibility