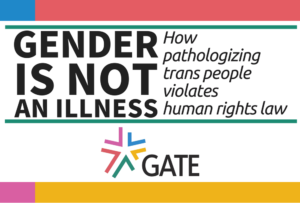 Trans people have been pathologized by psycho-medical classifications and national laws for over four decades. The UN has documented a range of violations against trans people, including, inter alia, killings, attacks, sexual assault, police violence, arbitrary detention, forced medical treatment, lack of legal gender recognition, abuses of sexual and reproductive rights, as well as discrimination in the areas of education, access to public facilities and services, employment, travel and access to justice. Importantly, UN and regional human rights bodies have linked these violations directly to the continued use of discriminatory diagnostic classifications and other laws and policies that pathologize gender diversity.

Purpose of the Publication

We are grateful to the donors that provided support for the production of this report: Arcus Foundation, Open Society Foundations and two anonymous donors.

When referencing this report, we recommend the following citation:
Kara, Sheherezade (2017) Gender is not an illness. How pathologizing trans people violates international human rights law. GATE.

You are free to share (copy and redistribute the material in any medium or format) and to adapt (remix, transform, and build upon the material) this paper. You must give appropriate credit, provide a link to the license, and indicate any changes that were made. You may do so in any reasonable manner, but not in any way that suggests that the licensor endorses you or your use of the material. You may not use the material for commercial purposes. If you remix, transform, or build upon the material, you must distribute your contributions under the same license as the original.

Gender is not an illness

On #TransDepathDay, we invite you to join us to discuss the past, present & future of trans depathologization & our resistance against anti-gender movements!

On #TransDepathDay, we invite you to join us to discuss the past, present & future of trans depathologization & our resistance against anti-gender movements!

GATE's Director of Programs, @EriKaCa1075 speaking at the #FastTrackCities Conference on how to regain focus on #HIV during the time of #Covid_19?
- Political will and engagmenet
- Stronger global advocacy
- Unlocking funding
- Placing people living with HIV at the centre

Amidst COVID-19 how to regain focus on HIV? We need political will & engagement, stronger global advocacy, stop pitting one pandemic against the other, unlock the funding, ppl w/HIV at center #FastTrackCities @EriKaCa1075 @ianrgreen @Dash_Sears @thatalexvance @SibongileTsha14