This is a joint submission on language related to gender identity and expression to the United Nations Independent Expert on protection against violence and discrimination based on sexual orientation and gender identity.

This short submission raises some issues with language, content, and references with regards to gender identity and expression issues in the IE SOGI’s first report. In part, the submission builds on the in-person private meeting that the IE SOGI had with 17 trans advocates during the 35th session of the Human Rights Council in Geneva on 7 June 2017. 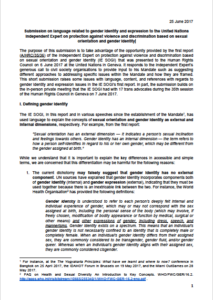 If you want to reference this work, please use the following citation:

You are free to share (copy, distribute and transmit the work) and to remix – that is to adapt – this work, as long as you attribute the work in the manner specified by the authors (but not in any way that suggests that they endorse you or your use of the work) and do not use this work for commercial purposes. If you alter, transform, or build upon this work, you may distribute the resulting work only under the same or similar license to this one.