It’s time for reform: Trans Health Issues in the ICD 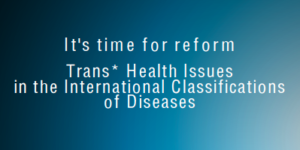 This document is aimed at giving an overview of the discussions that were held at the Experts Meeting organized by GATE – Global Action for Trans Equality. Invited by GATE, a group of more than 20 experts from most parts of the world met at the Dutch Ministry for Education, Culture and Science on November 16-18. The goal of the meeting was to explore alternative concepts to discuss alternative models for trans health classifications in the International Classification of Diseases (ICD-10), with the purpose of introducing new perspectives, analysis and references in the WHO process of producing the ICD-11. Participants came from India, Venezuela, New Zealand, Brazil, Spain, Switzerland, Sweden, China, USA, Thailand, Argentina, Great Britain, Lebanon and the Netherlands, and work in the fields of human rights, medicine, advocacy, as well as other related areas. Most experts also self-identify as trans.

GATE’s involvement in the process of the ICD revision and reform, including the organization of the Experts Meeting in The Hague, the production of this report and follow-up activities, is possible thanks to the support of the Dutch Government, the Open Society Foundations, and an anonymous donor.

At this point in the debates around these issues, GATE does not have a formal proposal to submit to the World Health Organization in regard to how trans specific and general health care issues should be included in the ICD-11. However, we do have some recommendations in regard to the process of including them:

Download “It’s time for reform: Trans Health Issues in the ICD” to read the results of this report.

If you want to reference this work, please use the following citation:
Global Action for Trans Equality, It’s time for reform: Trans Health Issues in the ICD, 2012

You are free to share (copy, distribute and transmit the work) and to remix – that is to adapt – this work, as long as you attribute the work in the manner specified by the authors (but not in any way that suggests that they endorse you or your use of the work) and do not use this work for commercial purposes. If you alter, transform, or build upon this work, you may distribute the resulting work only under the same or similar license to this one.