GATE welcomes today Erika Castellanos, who is joining us this week as our new Director of Programs. 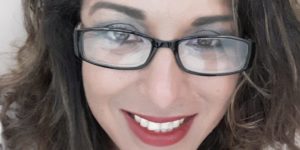 Erika is a trans woman from Belize and recently moved to the Netherlands. She has been engaged in trans and HIV advocacy at the local, regional and international levels.

Before joining GATE Erika served as Executive Director for the Collaborative Network of Persons Living with HIV, C-NET+, on HIV/AIDS programs. She also worked as a consultant in the development of a National Plan for Positive Health Dignity and Prevention (PHDP), as Researcher and Team Member for the Regional Stigma and Discrimination Unit in Belize City, and has conducted numerous studies among persons with HIV, MSM and Trans in Belize.

From 2016 to date Erika has also served as Member of the Communities Delegation to the Board of the Global Fund, Member of the GFATM Communities, Rights and Gender Advisory Group, Delegate from Latin America and the Caribbean to the UNAIDS PDB, vice chair of the Global Network of People Living with HIV and Member of the International Group of Trans Women and HIV (IRGT), among other affiliations.

We are very proud of having Erika joining our team. She can be reached at ecastellanos@transactivists.org

Please join us in welcoming her!