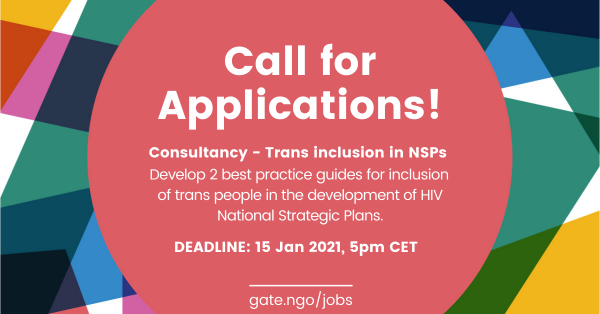 We encourage applications from trans, gender diverse and intersex people, Black, indigenous and Latinx people and people of color, D/deaf and disabled people, people from a migrant background, and sex workers.

In every country with available data, transgender populations are among the most at-risk groups for HIV. In 2017, global HIV prevalence among transgender people was approximately 13 times higher than among cisgender adults of reproductive age.1 Despite this, transgender populations are frequently not included in national data collection efforts or recognized by national governments as priority populations in their HIV responses. As a result, meaningful inclusion of trans people in National Strategic Plans (NSPs) is rare, and this exclusion continues to contribute to poor HIV-related health outcomes among the population and to comparatively low levels of trans-specific funding and programming.

Donors are increasingly prioritizing funding for interventions that are included in NSPs, so justifying inclusion of priorities not aligned with NSPs is burdensome and challenging. As such, where it has been accomplished, inclusion of trans populations in NSPs has helped to increase both domestic and international funding for trans communities.

GATE seeks to address the exclusion gap by developing best practice guidelines for the community and governments to increase the meaningful engagement of trans people in the development of NSPs.

Consultant will gather the necessary information to create a community-generated guide for meaningful transgender inclusion in NSPs and their development. The consultant will achieve the task by conducting a survey, key informant interviews and obtaining country case studies.

Using the above, the consultant will develop two best practice guides: one for community and one for governments. Both guides should include case studies.

GATE will select the consultant based on proposals from interested applicants.

Submit the following to the email listed below with the suggested subject line by 5:00 pm CET on or before January 15, 2021:

GATE is an international organization working on gender identity, gender expressions and sex characteristics. It was founded in 2009, and it is registered in New York (USA). GATE programmatic work is organized around four main areas: Depathologization, HIV, Movement Building and UN, with a cross-cutting emphasis on socio-economic justice.