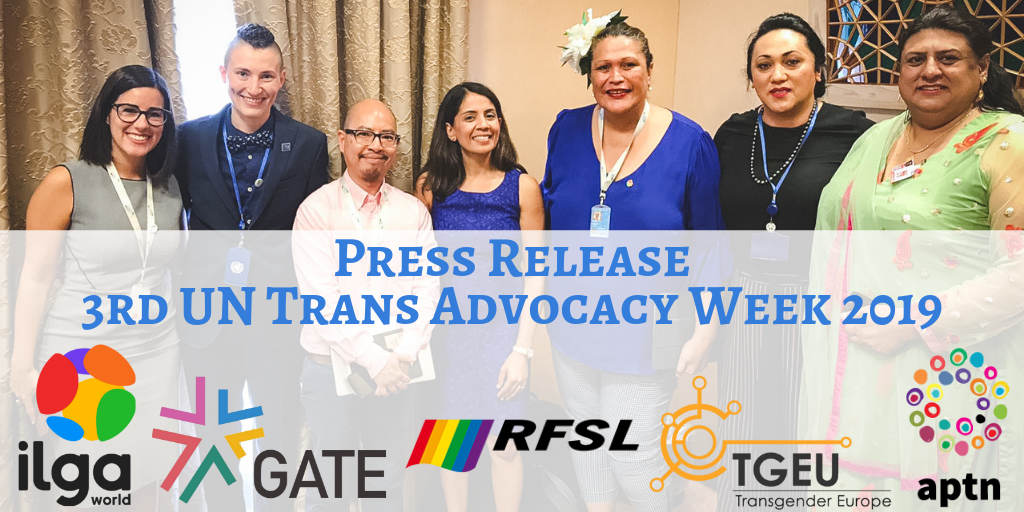 The UN Trans Advocacy Week was created in 2017 to support trans and gender-diverse activists’ engagement with international human rights mechanisms, and to increase leadership, visibility, and meaningful participation in decision-making processes at the UN. This year we had an additional goal: to support the renewal of the mandate of the UN Independent Expert on Sexual Orientation and Gender Identity (SOGI), which was adopted on Friday 12 July by the United Nations Human Rights Council in Geneva by a vote of 27 in favor, with 12 voting against and 7 abstentions.

“The importance of the renewal of the mandate of the UN Independent Expert on Sexual Orientation and Gender Identity cannot be understated,” said Mauro Cabral Grinspan, Executive Director of GATE. “Globally, trans and gender diverse people face extremely high rates of violent murders, suicide and suicide attempts, and rejection from family and society resulting in unstable access to housing, healthcare and other basic human rights. The renewal of the mandate of the Independent Expert on SOGI is a huge victory for trans and gender diverse people across the globe. It ensures that issues facing trans and gender diverse communities are tackled at the highest political level globally at the UN Human Rights Council.”

In an unprecedented effort, 16 defenders from 15 countries participated over the three weeks of the 41st Session of the Human Rights Council in Geneva from 24 June to 12 July – a historic landmark in trans and gender-diverse participation at UN level advocacy.

During the three weeks, two oral statements were delivered at the Plenary: the first reacting to the report presented by the Special Rapporteur on Health and the second responding to the report presented by the IE on SOGI. A third statement on climate change and women’s rights was also submitted. TAW participants attended meetings with the OHCHR, UNAIDS, special procedures, and country missions, and were actively involved in advocating for the renewal of the SOGI mandate.

One of the highlights of TAW 2019 was the side event focused on gender identity issues in the context of the SOGI Mandate, which was co-sponsored by Argentina and the United Kingdom. You can view the full video on GATE’s Facebook Page.

Over the past three years, Trans Advocacy Week has radically changed the landscape of trans and gender-diverse activism at the UN, contributing to introduce key issues affecting our communities worldwide, such as pathologization, poverty, social exclusion, legal gender recognition, violence, among others, while also articulating within wider human rights movements.

Trans Advocacy Week organizers and participants appreciate the continuous support of donors and allies whose commitment make this project possible, and our contribution bigger every year.