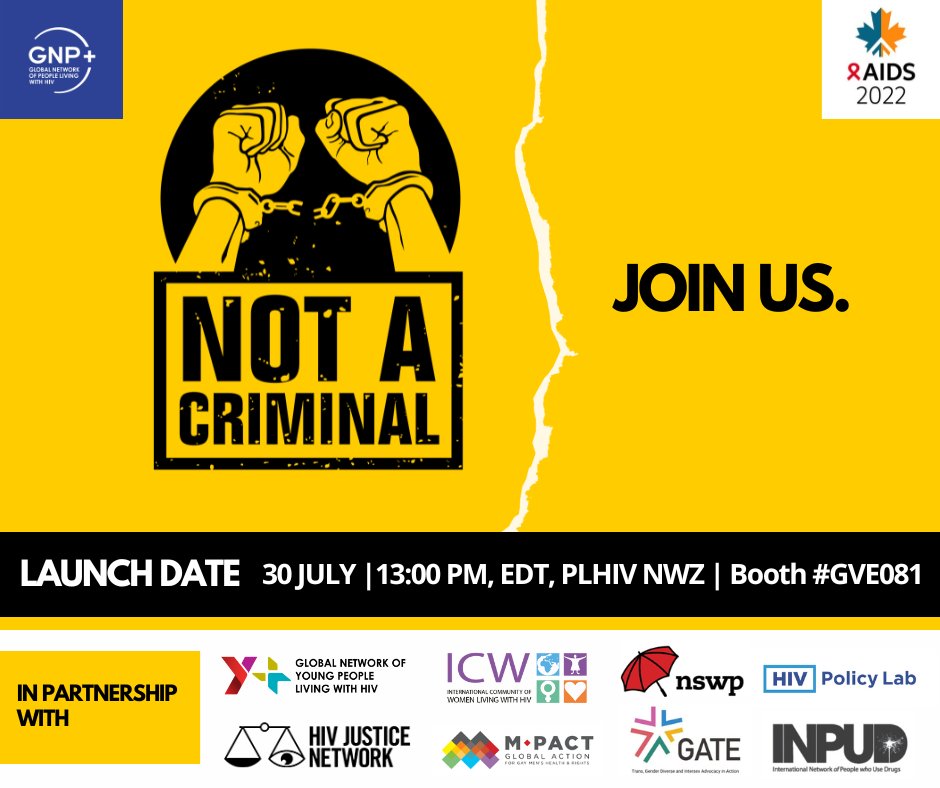 International AIDS Conference, Montreal — Nearly every country criminalises HIV transmission, same-sex relationships, sex work and/or drug use in some way. These laws push HIV-affected communities underground and away from HIV prevention, treatment and care. Today, the Global Network of People Living with HIV (GNP+) launches a new campaign to repeal these laws.

The recently launch UNAIDS ‘In Danger’ reports shows that 134 countries criminalise HIV transmission, non-disclosure of or exposure to HIV — at least two dozen other countries allow for prosecutions under other laws. Meanwhile, a 2021 international review found that almost 90% of nations globally criminalise drug use in full, while about three-quarters similarly police sex work.  In nearly 40% of countries, being in a same-sex relationship is either partially (24) or completely (39) illegal.

“All over the world, punitive laws, policies and practices feed discrimination and make us vulnerable to violence – from the state and others,” says Andrew Spieldenner, executive director of MPact, Global Action for Gay Men’s Health and Rights. “Our work, our sex, our gender, our joy and what we put in our body should not be up for others to judge, legislate or abuse.”

Outdated and discriminatory laws against those most affected by HIV continue to fuel discrimination and a lack of access to healthcare, including HIV prevention, care and treatment services.

“Criminalising sex workers, our clients and others who support our work creates precarious working conditions and exacerbates exploitation and our vulnerability to HIV and other poor health outcomes,” explains Global Network of Sex Work Projects (NSWP) Global Coordinator Ruth Morgan Thomas. “Stigma and discrimination that are rooted in criminal and other punitive laws create significant barriers that limit access to both health and justice.”

Research shows that about 12% fewer people living with HIV in countries that criminalized same-sex relationships, sex work or drug use knew their HIV status as of 2021. On average, these countries also had 10% fewer people who were virally suppressed. When someone living with HIV is virally suppressed, it means that antiretroviral treatment has brought the level of HIV in their blood down to levels so low that they can no longer transmit the virus.

“People who use drugs are intimately aware that criminalising people and communities always generates wider harms,” says Judy Chang, executive director of the International Network of People who Use Drugs (INPUD). “The global war on drugs is a war on people who use drugs and has led to mass deaths, incarceration, and social injustices that disproportionately impact Black, indigenous and people of colour and women.”

Chang continues: “The recent US Supreme Court decision to overturn Roe v Wade and remove federal protections on the right to abortion has forced us all to envisage a world in which women seeking autonomy over their own bodies and lives are criminalised. This is our lives every day.”

“Criminalization is sometimes framed as a tool to protect women who are experiencing intimate partner violence or sexual assault. But in reality, these laws increase stigma and discrimination against women and girls living with HIV and place us at increased risk of violence,” says Charity T. Mkona Chairwoman of ICW Global.

Today, GNP+ joins with networks representing young people, women, the LGBTI+ community, sex workers and people who use drugs to launch the “Not A Criminal Campaign” to decriminalise HIV non-disclosure, exposure and transmission; same-sex relationships; sex works and drug use.

The “Not A Criminal” Campaign is a partnership between GNP+,  the HIV Justice Network, Y+ Global, the International Community of Women Living with HIV (ICW), the Global Network of Sex Work Projects (NSWP), INPUD, Global Action for Trans Equality (GATE) and Global Action for Gay Men’s Health and Rights (MPact).

As part of the “Not A Criminal” Campaign, organizations are demanding countries replace bad laws with evidence-based legislation to protect our communities from criminalization, discrimination and gender-based violence, and support the creation of independent human rights institutions. Additionally, the campaign calls on United Nations agencies and donors to develop strong, coordinated, and high-profile mechanisms to monitor progress on these member states’ commitments.

“Far from being a legitimate public health tool, criminalisation of our behaviours, choices and identities is about the enforcement of an oppressive morality through policing our bodily autonomy,” HIV Justice Network Executive Director Edwin Bernard says. “This punishment of our vulnerability also means we won’t be able to end the HIV epidemic by 2030.”

In 2015, nations committed to ending AIDS as a public health threat by 2030 as part of the Sustainable Development Goals. A promise complemented by the adoption of the Global AIDS Strategy and the 2021 UN Political Declaration on HIV.

Yet, the world continues to witness the slow adoption of and refusal to implement global commitments to address stigma, discrimination, criminalisation, and violence for people living with and most affected by HIV worldwide.

“Every day, young people in all our diversity are criminalized because of our health status and sexuality and denied our inherent rights as human beings,” Tinashe Rufurwadzo, Y+ Global director of programmes, management & governance. “Our leaders are silent, and our national policies are ignorant and negligent of our needs.”

She says: “Criminalization affects us all — it hurts us, it kills us, and we need to address it in a united, communities response”

A list of countries criminalising HIV transmission, same-sex relationships, sex work and drug use can be found here.

Below is a graphic from the latest UNAIDS ‘In Danger’ report showing the numbers of countries that criminalise HIV transmission, same-sex relationships, sex work and drugs.

It is finally here! The moment we have been waiting for…

The East Africa Trans Conference will be held on 3rd to 5th November 2022!!

Our session on #intersex people and sexual rights is starting NOW in @UNAIDS Room 519b at #AIDS2022.

Our Executive Director Mr. Jay Mulucha has today presented at the International AIDS Conference about:
Putting the community at the forefront of decision making for sustainable financing of HIV programmes.