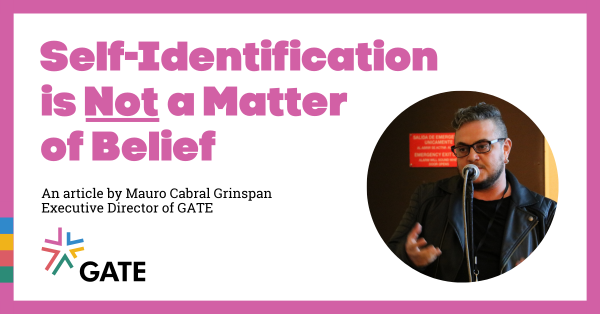 Something happened yesterday at the IDAHOT Forum 2021. More precisely, at the “High Level Ministerial Panel on LGBTI+ Rights Across Europe”. When asked about the process on the Gender Equality Act, the UK representative, Kemi Badenoch, responded: “we don’t believe in self-identification”.

Coming from the UK Ministry for Women and Equalities, such a response was not surprising, even when proffered just one day after the UK government praised itself for planning its first global LGBT conference. As many trans and gender diverse advocates and our allies around the world know by heart, too many LGBT-friendly States simply refuse to notice the contradiction between proclaimed friendliness and institutionalized transphobia. Sadly, the UK is not an exception.

Minister Badenoch’s response seems to be crystal clear and, to certain extend, it is. Her response affirms a negation: she affirmed the governmental lack of belief. However, that response calls for another question: if it does not believe in self-identification, what does the UK government actually believe in?

Of course, It could be logically possible to allege that, maybe, there is no governmental belief at all – but evidence (e.g., Liz Truss’s statements) proves that possibility to be wrong. Therefore, we can safely assume that the UK government has its own beliefs on this matter. It believes in the opposite to self-identification.

History has showed, time and again, the very content of such a belief. When States refuse to accept and respect individuals’ right to be identified as themselves (which is to say, their right to identity), gross human rights violations occur. The opposite to self-determination has taken the form of the imposition of psycho-medical and legal authority. Instead of providing the necessary institutional support to allow all persons to be themselves without suffering any kind of stigma, discrimination and violence, such an imposition creates and reinforces an oppressive hierarchical system. The opposite to self-identification means, for example, psychological and psychiatric “assessments” and medical “examinations” (how deep into a person’s mind and body should an expert go to “assess” their identity?). It also means the imposition of requirements such as unwanted bodily modifications and sterilization (how much of a person’s flesh is needed to “prove” their identity?). And it also means the imposition of other requirements, such as divorce or renouncement of the right to get married (how much of family life should a person give up for getting their identity legally recognized?).

All the requirements listed above have been identified as human rights violations by international, regional and national systems. Some countries – such as Sweden and the Netherlands – are apologizing to the victims of such impositions and offering them rehabilitation and reparations. Furthermore, even the World Health Organization has scientifically established that a personal identity that differs from the expectations associated with the sex assigned at birth is not a disorder of any kind.

This lack of belief in people’s self-determination with regard to their personal identity before the law is being justified through a different kind of belief. According to that belief, gender identity laws based on self-determination will have the effect of an attack perpetrated by Thanos: half of the world – women – will just be eliminated. It is quite a paradox: many people suffer human rights violations just because they request to be legally and socially treated as they are, and that request is attacked as “irrational”; however, those human rights violations are justified by certain States on the ground of an Avengers’ inspired fantasy, and thatjustification is defended as a rational belief.

The global conference being planned by the UK government is titled Safe To Be Me, which is a great name. However, as often happens, many people do not believe it to be real, or to correspond with the UK’s true identity. Making it real and inviting LGBT people from around the world to go there and to feel and be safe to be themselves requires a first step: critically examining those beliefs that make the world an unsafe place. Minister Badenoch’s testimony of disbelief seems to go in the opposite direction.

I am optimistic, though: beliefs do change. I don’t have arguments to support that optimism, but facts. An entire country of facts. Just ten days ago, Argentina celebrated 9 years since passing its Gender Identity Law. Believe it or not, it is fully based on self-determination and neither (cis) women nor (cis) women’s rights have been eliminated because of it.  Actually, by the end of 2020 and in spite of the fierce opposition of Argentinian conservative movements and institutions (and even of the Argentinian Pope!), abortion was legalized in the country. Not only that: the Argentinian abortion law talks about (cis) women and of other people with the capacity for getting pregnant.  That is the truth: there is no opposition between (cis) women’s rights and trans people’s rights. There has never been one, there is not one, and there won’t be one, Never. Anywhere. Anything seems to be possible in fiction, but it is time to believe in reality. And reality is that we are fantastically stronger together, and together we are creating a better world for all.

Self-Identification is Not a Matter of Belief

Current debates on the sex & gender divide are so heated that even writing about both words at the same time can feel dangerous. The line that exists reminds us of the contradiction & opposition between them.

A new global pledge to end all inequalities faced by communities and people affected by #HIV towards ending #AIDS was adopted by UN Member States yesterday at the #HLM2021AIDS
More info: https://www.unaids.org/en/resources/presscentre/pressreleaseandstatementarchive/2021/june/20210608_hlm-opens

Member States have adopted a set of new and ambitious targets in a political declaration at the United Nations General Assembly High-Level Meeting on AIDS.

If achieved, 3.6 million new HIV-infections and 1.7 million AIDS-related deaths will be prevented by 2030.

"We affirm the progress represented by the #PoliticalDeclaration even as we're disappointed by some critical omissions/weaknesses. We pledge our action & vigilance to address these as the work of moving towards an AIDS-free world continues."Read➡️http://bit.ly/MSH-PD #WeAreHLM

The adoption of the #HLM2021AIDS Political Declaration pledges to end all inequalities faced by communities affected by #HIV.
It includes explicit naming of Key Populations, transformative & measurable targets on programmes & 10-10-10 targets on societal enablers to end #AIDS.

#HLM2021 'For the first time ever, transformative and measurable targets on programmes that can make the end of AIDS a reality are part of the Political Declaration on HIV/AIDS adopted by the @UN General Assembly.' Read statement ➡️https://bit.ly/2SbofAF
#WeAreHLM #PressureOn