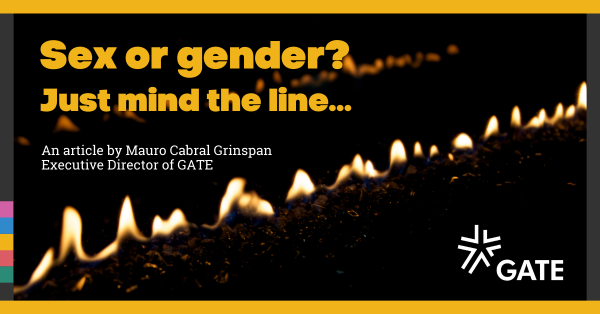 Sex and gender are two quite different words. Their meanings are quite different. The line that exists between them is there to remind us of that difference and, in some cases, of the contradiction and even opposition between them.

However, that the line is also needed because, in everyday speech, sex and gender are quite closely-related words: so close that often they are used interchangeably. The line not only highlights that separation, but also their connection. At this moment, that line is on fire. It is neither a new line nor a new fire. In fact, this burning line could be described as a zombie fire, just coming back to life after seemingly being gone for some time.

Current debates on the sex and gender divide are so heated these days that even writing about both words at the same time can feel dangerous. This is understandable: both words have been so magnified that, instead of presenting as two separate but related concepts, they appear to be two colliding worlds. This collision of words/worlds, and the subsequent explosions, are having a very logical but negative effect: in the midst of the fire, people are forgetting about the line.

It has never been easy to walk the line between sex and gender, but the line itself is not to blame. It has simply been traced to separate and align two treacherous territories. Here’s the thing: as soon as we set foot on one side of the line, we find ourselves setting foot on the other side. For example: sex seems to be the land of the “natural”, but it there is nothing “natural” in our understanding and organizing of bodies. Conversely, gender seems to be the land of the “cultural”, but there is nothing “cultural” in our embodied being. Sex is always gendered. Gender is always sexed. Yes, sex and gender are quite different, but they are also very much the same. In the end, the only thing that matters is the line between them.

Tracing and enforcing lines and divisions has been a human passion throughout history. Borders between two or more countries, markers separating city and countryside, lines defining neighborhoods, houses, rooms. The division between sex/gender is just another line. And as happens with all those other lines, what really matters is where the power lies in deciding who can cross them, with what requirements and under what circumstances. In that sense, and as history shows, lines have an unstoppable reproductive capacity. Once they are in place and at work, lines start producing and reproducing distinctions between those who control it and its crossings, and those who are subjected to line-control. For example, many individuals and institutions are insisting on their right to draw a line between those people whose identities, bodies and choices “should” be recognized and those people whose identities, bodies and choices “should not”. At this very moment, trans and gender diverse people are caught in that line of fire.

The challenges posed by the collision between sex and gender cannot be solved by reading a dictionary, establishing the historical and present meaning of those words, or attributing to them some supernatural power to make human beings appear or disappear. No word will liberate us from questions about the line. That question is not about who we are in relation to sex and/or gender, but about who we are, period. It is an ethical and political question, or both together. For instance: are we the kind of people who are committed to dismantling all forms of stigma, discrimination and violence, or are we the kind of people who are committed to making stigma, discrimination and violence a “natural” and “cultural” destiny for many? Do we believe in our individual, social and institutional privilege to violate human rights to govern other people’s identities, bodies and choices? Or do we believe in our institutional, social and individual duty to ensure human rights for all? Do we believe that only people that look, talk, move and love like us have the right to identity, and that everyone else’s rights should be restricted or denied? Or do we believe that all people have the same right to be themselves, and that no one should have the power to restrict or deny other people’s right to identity?

Many times, lines (and, in particularly, lines between words) are wrongly assumed to be purely abstract. They are not. If you doubt it, look at the lines between words such as “citizen” and “foreigner”, “healthy” and “pathological”, “people who look like me” and “people who don’t look like me”, “torture” and “freedom from torture”, “self-determination” and “imposition”. Those lines have real, material, painful effects in the world. Furthermore: those lines, and the power systems that establish and control them, have the capacity to literally crush people’s lives and futures.

As Raven Kaldera once wrote,

“whenever a line is drawn, it passes through someone’s flesh”.

The next time you read or hear about sex and gender, please be mindful of the line.