WEBINAR: Trans Depathologization in a time of Anti-Gender Movements 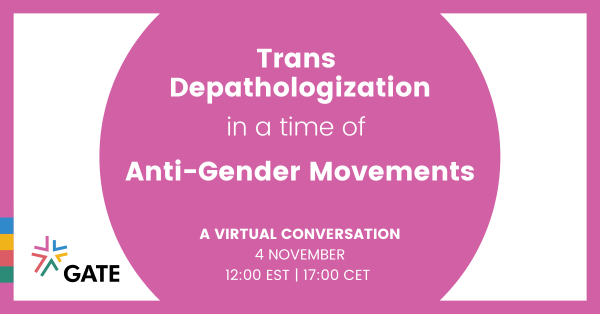 21 October 2021 – Next year, the implementation of the ICD-11 will officially begin. Over the next several years, States will work to make a reality the removal of categories that identified being trans as a mental disorder, implementing new pathways to legal gender recognition, gender affirming healthcare and its coverage.

The world in which the ICD-11 will be implemented is certainly different from the world in which it was approved in 2019. The COVID-19 pandemic and its consequences have transformed our world and have profoundly affected the capacity of medical systems around the globe – including that of the World Health Organization itself. The implementation of the ICD-11 will also take place in a context marked strongly by the actions of anti-gender movements.

Right now, trans depathologization is threatened by both conservative and radical anti-gender movements. These movements not only question the process surrounding the ICD-11 reform but also promote a return to psycho-medical and legal pathologization through different means: denying trans people’s autonomy and self-determination, attacking gender diversity, advocating for the re-introduction of conversion therapies and targeting children and those supporting them, among other tactics.

With the goal of reconstructing and analyzing the past, present and future of trans depathologization within the context of resistance against anti-gender movements, we invite you to participate in this virtual conversation led by GATE’s Executive Director, Mauro Cabral Grinspan.

Webinar: Trans Depathologization in a time of Anti-Gender Movements