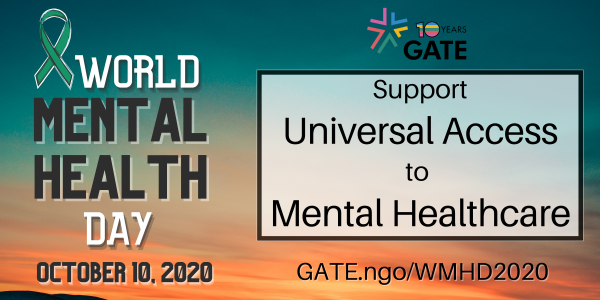 10 October 2020 –On World Mental Health Day, GATE joins the international call for universal access to mental healthcare and its coverage, to dismantle all human rights violations in psycho-medical institutions, and to ensure access to rehabilitation, truth and reparations to victims of such violations.

The COVID-19 pandemic has exponentially increased the mental health challenges faced by humankind in general, in particular affecting the most vulnerable groups in society. Among those groups, trans and gender diverse people have faced challenges such as mobility restrictions enforced by police based on legal gender, domestic confinement in hostile conditions, the impact of the global economic crisis on formal and informal work, including sex work, and the loss of supportive community spaces. This situation has harshly affected many racialized, poor, migrant, incarcerated and/or homeless trans and gender diverse people around the world.

The effects of the COVID-19 pandemic on the mental health of our communities have been magnified by an escalation of transphobia in social, institutional and media settings. This escalation has included, for example, flagrant setbacks in the rights to legal recognition of gender identity and gender affirmation procedures, as well as public campaigns that incite fear and hatred. These campaigns have, for example, called for exclusion of our communities from shelters for victims of gender-based violence, harassment of families and groups that support trans and gender-diverse children and adolescents, and criminalization of physical and mental health professionals supporting our communities. Attacks against the human rights of trans and gender diverse people have also included public calls to re-pathologize us and to re-categorize our gender identities, gender expressions and sexualities as symptoms of mental health disorders.

The current escalation of transphobia does not come only from “conservative” anti-gender movements, such as those comprised of right-wing individuals, groups, institutions, media, political parties and/or governments; it also comes from so-called “radical” sectors, including feminist and LGB individuals, groups and networks. These sectors exercise a visible influence upon mainstream media, as well as in central, and even left-wing, political parties and governments. One of the most destructive points of agreement between “conservative” and “radical” groups is the promotion of so-called “conversion therapies” against trans and gender diverse people, including teenagers and children.

In 2019, the World Health Assembly approved the eleventh version of the International Classification of Diseases (ICD-11), produced by the World Health Organization (WHO) after more than a decade of work. One of the most decisive results of this process was the affirmation that the gender identities, gender expressions and sexualities of trans and gender diverse people are not pathologies. This same position was reiterated by the UN Independent Expert on SOGI (Sexual Orientation and Gender Identity) in his reports presented in 2018 and 2020. The devastating consequences of the psycho-medical and legal pathologization of trans and gender diverse people were also denounced in the Reports presented by the UN Special Rapporteur on Torture in 2013 and 2016, and by the UN Special Rapporteur on Health in 2017. By calling to re-pathologize us, to restrict our access to basic human rights and to subject us to practices that amount to torture, cruel and inhumane treatment, anti-trans movements are contradicting both medical and human rights standards internationally.