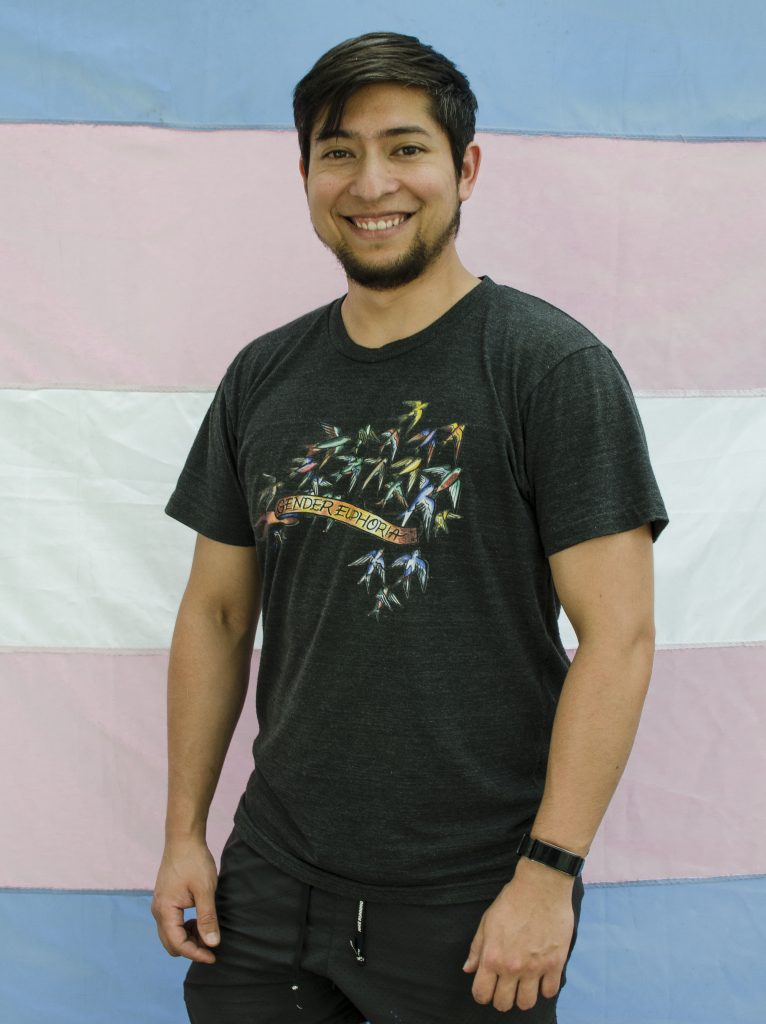 My activism began in 2005 in LGBTI + groups of Santiago, as one of the founders of the first transmasculine support group of in Chile. I have participated in the organization of feminist meetings at national and regional (Latin America) level. In 2015, we created the first magazine in the country that focused on topics relating to the transgender community. Currently, I am the Executive Coordinator of OTD.

What is the situation facing trans people in your country

Transphobia still exists institutionally within the government, as there are no departments dedicated to working on resourcing and planning around the issues that affect the trans community. The Ministry of Women and Gender Equality, which is supposed to consider the situation of trans women, haven’t even created a plan or intervention for them. The trans community lacks visibility, even within organizations working on sexual diversity, and there is a lack of transparency regarding the hiring of transgender people, so access to work is still very difficult. There are transphobic politicians who attack trans people whenever they can, especially from right-wing parties, but also from the center or the left, the latter excusing themselves by saying that “these issues divide the left”.

Discrimination and violence happens intentionally or by omission, as there are no public policies or laws protecting trans people. The policies that do exist are binary, do not take into account the diversity of trans identities, and refer only to men and women. Even in spaces that consider themselves to be trans-friendly, non-binary trans people are still invisible and their specific needs are ignored with regards to actions or policies within those organizations/institutions. Violence is usually directed towards those with diverse gender expressions. If transphobic people realize that a person is trans due to their gender expression, they can be targeted and attacked, in public spaces or behind closed doors from their own family. The most subtle transphobia comes from families, who say that “being trans is just a phase, that it will pass”, or trying to make the person change, especially transgender children. Being a transgender child is one of the most vulnerable positions to be in , because you depend on your parents and their approval, without which you are powerless.

In general, in any public institution there are reports of discrimination on the basis of gender. There are practically no public institutions that have gender neutral bathrooms, and within public institutions individuals are always referred to as him or her, with no thoughts of referring to people in a gender neutral way to avoid this type of discrimination. Accessing work is complex, as discrimination still exists towards diverse gender expression, and if you haven’t changed your gender on your identity card, you will face discrimination within the education system, although there are schools that are trans friendly. There is a lot of discrimination and bullying and very few attempts from educational professionals to intervene. With regards to sex work, aggression and violence towards trans sex workers on the street are reported, but there is no institutional support for sex workers who are attacked, nor is there support for those who would like to stop doing sex work.

Although the gender identity law was passed, it is nevertheless a very precarious law compared to neighboring countries such as Uruguay or Argentina. The Chilean law will allow the change of name and gender to people over 18 as long as they are not married. This is a violation of the right to raise a family, because if a trans person is married, they will be forced to divorce in order to change their gender marker. Children under 14 will not have access to any legal gender recognition, so it’s unknown what’s going to happen to them, and non-binary people are left out completely. This law is not yet in force, we expect this to happen in October 2019.

In Chile, HIV is uncontrolled, and there are no statistics relating to the trans population to see whether the situation has worsened or improved. We have tried to collect statistics from the government, but as they do not have them filtered by identity, it is very difficult to search this data in order to have an overview of the HIV situation facing trans people.

With regards to accessing surgeries and hormones, there has been an increase in the number of hospitals that are considering this issue, and there is even one doctor per hospital that works directly to address access to hormone therapy and surgeries. However, these are focused only in the larger cities, and this is not the case in the more distant regions or cities, so many trans people are still excluded from access to transition-related healthcare. This means that, in accessing healthcare, there are still reported situations of discrimination or abuse in situations where there are only cisgender people without training or sensitivity to interact humanely with transgender people.

What is the biggest threat to the rights and lives of trans people in your country right now, and what is your organization doing to address these problems?

The issue of physical violence is currently a huge threat: in recent months there have been trans people who have been killed. We have no laws other than the new gender identity law addressing this ongoing issue, so there is a continued lack of public policy guaranteeing the rights of trans people.

OTD tries to be a well integrated organization in order to be able to address as many issues as possible, but it is very difficult. We always try to have a community base of trans people who are contributing towards the direction of the organization in an attempt to tackle as many issues as possible facing the trans community in Chile. We have focused strongly on: the process of approving the gender identity law; on informing and counseling as many transgender people as possible; on finding and collating statistical information on the trans population that is neglected in research carried out by government institutions; and in educating and training public and private institutions, as we believe that education is fundamental to transforming the culture that we live in.

How can trans allies and the international (trans and allied) community help?

I would ask you to always take into consideration the opinion of trans people. In the past, cisgender allies have written public policies for trans people without consulting trans people of all identities. You can not make policies or actions for us, without us. Also, consider the issue of resources, as many of us are not working because there is no money.

I believe that we must increase the visibility of trans people in international decision-making spaces, as well as increasing allocation of resources to policies that address the situation of trans people and highlight violations of the rights of trans people that are still happening today.

Advice on how to survive transphobia?

Community organization is fundamental, although individual activism is important and hopefully more and more people feel the call to be activists. It is also necessary to work with your peers to try to build community in order to strengthen our communities. An individual can make change happen, but if that individual can join forces with their peers to ethically build an organization to increase their impact, it is essential to do so in order to generate safe spaces for other trans people.

I believe there isn’t much awareness that transphobia exists, I think that discrimination and violence are often minimized, and attempts are made to force trans people to be more ‘normal’ in order to be accepted in society, which is very bad. Often we have our own internalized transphobia to contend with, which is also bad. We have to learn how to remove the internalized transphobia that we may have towards our peers that do not conform to an ideal of ‘normality’ that is imposed on us by cisgender society. We have to work our own transphobia in order to bring down the one on the outside.

The OTD Association is a group made up of transgender people and cisgender allies that operates from the city of Santiago, Chile.

We work with the transgender community out of our headquarters, providing peer counseling services, psychological care and community development workshops. We also provide educational training to a wide range of public and private institutions, educating them about transgender people and our rights and we work with health institutions to improve quality of care for the trans population. We have published studies on the trans population and created campaigns and public activities promoting the rights of trans people. Our legislation unit were at the forefront of the processing and approval of the recent Chilean Gender Identity Law.