Trans, gender diverse and intersex people have been historically pathologized by psycho-medical and legal institutions. GATE is working internationally to advance depathologization, while ensuring all people’s full access to legal gender recognition, gender affirming healthcare and its coverage. We are also advocating for many human rights violations to be recognized as rooted in pathologization (e.g., ‘normalizing’ procedures on intersex infants, ‘conversion’ therapies, and other forms of torture and ill treatment in psycho-medical institutions).

We do this through:

Gender is not an illness

Trans people have been pathologized by psycho-medical classifications and national laws for over four decades. The UN has documented a range of violations against trans people, including, inter alia, killings, attacks, sexual assault, police violence, arbitrary detention, forced medical treatment, lack of legal gender recognition, abuses of sexual and reproductive rights, as well as discrimination in the areas of education, access to public facilities and services, employment, travel and access to justice.

Read Gender is not an Illness now

Our WHO submission on intersex issues 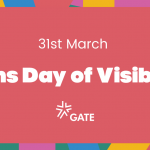 After a year of lockdowns and restrictions that have particularly... 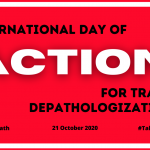 A year ago, trans depathologization made a decisive step forward...

You can support our work in depathologization online today.

Over the past ten years, #trans & gender diversity issues have been addressed increasingly at the @UN & we need to continue to build on this work.

So what can you do RIGHT NOW to engage with the UN on trans & gender diverse issues?

Thank you so much to @ItGetsBetter and @riotgames for including GATE in your fundraising! Your generosity, and the generosity of your viewers, is incredible 🥰

Unfortunately, yesterday's #TransDayofVisibility stream was not a success...

APRIL FOOLS: It was amazing, and we raised more than $9,000 for @theokraproject and @gateorg with a $5K donation from @riotgames' Rainbow Rioters!

Even better, you can still watch & donate on Twitch:

The Center for Applied @TransStudies is the leading academic organization dedicated to scholarship on the social, cultural & political conditions of #trans life. They are an independent nonprofit run by trans people for trans people. https://www.appliedtransstudies.org/ #TransDayOfVisibility